Visual Inspection in Maintaining the Safety of Electrical Equipment

Visual Inspection in Maintaining the Safety of Electrical Equipment

Current health and safety guidance on the use of workplace equipment puts even greater emphasis on effective visual inspection, says Willie Cody of IPAT Ltd

There has long been considerable evidence that faulty electrical appliances in the workplace consistently pose a serious threat to people and property through accidents, injuries and fire hazards. There is also indisputable evidence that the periodic in-service inspection and testing of electrical equipment prevents injuries, saves lives and avoids workplace fires that would otherwise be devastating for those involved.

h as the Health and Safety Executive (HSE) and the IET (through its Code of Practice for the In Service Inspection and Testing of Electrical Equipment) is that electrical equipment maintenance regimes should be based on a more focused and robust approach to assessing the safety risks posed by appliances.

The sentiment behind the recent guidance follows concern that the implied

legal requirement for maintaining the safety of electrical appliances was being applied too broadly and disproportionately, resulting in situations of costly over compliance, particularly in more benign working environments.

As a result, the clear message now is that only when the extent of the potential hazard associated with a particular item of electrical equipment has been assessed and understood can it be managed through a programme of inspection and testing.

The legal requirements relating specifically to the use and maintenance of electrical equipment are contained in the Health and Safety at Work Act. These Regulations apply to all work activities involving electrical equipment. They place duties on employers, the self-employed and employees (subsequently referred to as ‘dutyholders’) to control the risks arising from the use of electricity.

Although electrical equipment must be maintained to prevent danger, the law does not say how this is to be achieved or how often. Dutyholders, aided by competent advisors or contracto

rs where needed, must determine the level of maintenance needed according to the risk of an item becoming faulty, such as how it is constructed and where it is used.

The measures need to control the risks associated with the use of portable electrical equipment should be based on a formal assessment. A risk assessment is about identifying hazards and taking sensible and proportionate measures to control the risks in the workplace. These risks can be managed and controlled by setting up an appropriate maintenance plan, which should be proactive to prevent incidents happening rather than reactive after an incident or accident has occurred.

Following a risk assessment, the effective maintenance of portable electric equipment can be achieved by a combination of checks by the user; formal visual inspections by a competent person and where necessary a combined inspection and test, by an electrically competent person.

nowledge of what to look for, what is acceptable, and who has been given the task of carrying out the inspection (that is, they are competent to do the task).

The suggested initial intervals for inspecting portable electrical equipment vary according to the type of equipment being used from every 2-3 years in some working environments, and particularly those regarded as being low risk, to every 6 months or annually in other more demanding locations.

For example, equipment used on a construction site or in a heavy steel fabrication workshop will need much more frequent inspection than equipment such as computers in an office. In all cases, however, the period between inspections should be reviewed in the light of experience. Faulty equipment should be taken out of service and not used again until properly repaired. If necessary, it should be tested.

To avoid danger, trained people should know when the limit of their knowledge and experience has been reached. Simple, written guidance relating to the formal visual inspection can be produced that summarises what to look for and which procedures to follow when faults are found or when unauthorised equipment is found in use. This guidance can also help equipment users and the inspections can also help to control the risks and to monitor the user checks.

A competent person should carry out regular inspections in a formal and systematic manner to identify any damage, including the condition of extension leads, plugs and sockets. In particular, as part of the visual inspection, it is important to consider whether the electrical equipment is being used in accordance with the manufacturer’s instructions, the equipment is suitable for the job, there has been any change of circumstances and the user has reported any issues.

Special additional checks, for example, could involve the removal of the plug cover to ensure that there are no signs of internal damage to the plug, the correct fuse is in use and that the wires including the earth, where fitted, are attached to the correct terminals.

Records and results of inspection

Records of maintenance including test results should be kept throughout the working life of equipment.

The IET Code of Practice also recommends that test results should be made available to subsequent test operatives. In its guidance for maintaining portable electrical equipment in low risk environments, the HSE also suggests that it may be useful to keep records of all inspections.

Written records are also advisable in terms of the risk assessments undertaken. Any record produced should be simple and focused on controls. If there are fewer than five employees it does not need to be written down. But it is useful to do this so it can be reviewed at a later date, for example if something changes. If there are five or more employees, the risk assessment must by law be written down.

All of this advice reinforces the importance of effective recordkeeping as a means of demonstrating compliance – and the value of indisputable evidence such as photographic images of visual inspections and risk assessments should not be overlooked.

The current guidance on maintaining the safety of electrical equipment used in the workplace puts considerable importance on effective and formal visual inspection, as well as on the relevance of comprehensive records.

Clearly, visual inspections require visual records, and to meet this need the most advanced p

ortable appliance testing instrumentation available is equipped with a built-in digital camera. This availability gives users the ability to take high quality images at the same time as user checks, inspections or testing is carried out. In this way it unequivocally shows the evidence and reasoning behind health and safety judgements taken at a particular time.
For complete traceability and comprehensive record keeping, images taken during risk assessments and visual inspections should also be tagged against the records of any electrical testing carried out. Those integrated portable appliance testers that incorporate a camera alongside the capability to conduct all recommend electrical safety tests, provide a streamlined and error free means of achieving this.

This is an important consideration in demonstrating compliance (or non-compliance) with the relevant regulations and, if an incident or accident should occur, can be particularly relevant in demonstrating that all due diligence was taken in preventing an unsafe situation.

In addition, the ability to link images with asset records has the added benefit of enabling quick and easy identification of appliances and equipment during re-testing. 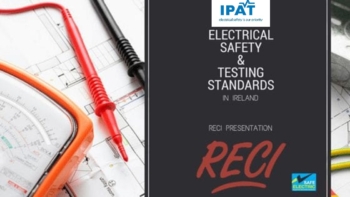 About the Author: Willie

Willie qualified as an electrician in 1992 where he went on to work with CG Services where after a brief period he became Contracts Manager and Instrumentation Manager. After 10 years working with CG Services Willie then moved to Kirby Group Engineering where he worked as a Project Manager and Quality Manager in the company setting up the ISO 9001/2000 system for this company that employed 300+ employees. In 2006 Willie set up his own company IPAT Ltd. and has never looked back and can boasts some extremely high profile clients including Irving Oil, Zenith Energy, Poolbeg Oil Storage, Ringsend Oil Storage, Tarbert Oil Storage facilities, Philips 66 Whitegate and Bantry, Heineken Ireland, Glaxosmithkline, BDL Hotel Group, Moorepark, Teagasc and the list goes on...IPAT Ltd specialise in the following services: Periodic Inspection Testing on Electrical Systems, Portable Appliance Testing, Thermal Imaging, Fire Alarm Testing, Emergency Lighting Testing, ATEX Inspection Services, Earthing Inspections & Electrical Maintenance.