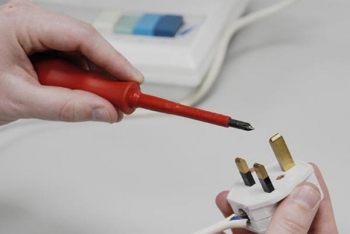 After one employee received a shock, management were alerted, but failed to isolate the machine or post warning notices to stop staff using it. Later the same day, a second worker was shocked when he turned the machine off.

An investigation by Manchester City Council found the machine had a faulty switch and a panel missing, meaning a live circuit board was exposed. Neither worker was seriously injured by the shocks, but the court heard that they could have been fatal.

Cineworld Cinemas pleaded guilty to breaching Section 2(1) of the Health and Safety at Work Act.

PAT Testing or Portable Appliance Testing covers virtually anything that can be plugged into a 110Volt, 240Volt, 415Volt socket.

PAT Testing is a safety test for any electrical item with a plug. It is basically a repeat of the tests carried out by the manufacturer before the item left the production line. The PAT tests should be carried out on items with a plug top from kettles, computers, photocopiers, microwaves, extension leads to larger items such as vending machines. At IPAT we also carry our Microwave Testing that determine if there are any leaks in your Microwave Oven.

Health & safety Act 2007 SI-299 requires all portable appliances to be tested periodically to verify their safe for use.

IPAT Ltd. will ensure peace of mind for our clients and will set up a schedule for all appliances to be PAT Tested.

IPAT Ltd. use the seaward supernova for all its testings.

About the Author: Willie

Willie qualified as an electrician in 1992 where he went on to work with CG Services where after a brief period he became Contracts Manager and Instrumentation Manager. After 10 years working with CG Services Willie then moved to Kirby Group Engineering where he worked as a Project Manager and Quality Manager in the company setting up the ISO 9001/2000 system for this company that employed 300+ employees. In 2006 Willie set up his own company IPAT Ltd. and has never looked back and can boasts some extremely high profile clients including Irving Oil, Zenith Energy, Poolbeg Oil Storage, Ringsend Oil Storage, Tarbert Oil Storage facilities, Philips 66 Whitegate and Bantry, Heineken Ireland, Glaxosmithkline, BDL Hotel Group, Moorepark, Teagasc and the list goes on...IPAT Ltd specialise in the following services: Periodic Inspection Testing on Electrical Systems, Portable Appliance Testing, Thermal Imaging, Fire Alarm Testing, Emergency Lighting Testing, ATEX Inspection Services, Earthing Inspections & Electrical Maintenance.